A glimpse into this week's cyber news

The cyber threat landscape had changed around the world as malicious actors have pursued new targets, stretched boundaries and taken advantage of people working remotely.
The World Health Organization (WHO) has been cyber attacked by Iranian, Russian and South Korean hackers along with many others. Governments must understand the crisis and take appropriate measures to ensure their security and political survival.
One Western intelligence official stated that “everyone” is targeting the Wuhan Institute in search for evidence to back up the claims that the virus could have escaped from there. This is top priority for cyber-spies.
The National Cyber Security Centre (NCSC) has shifted to protect areas which suddenly moved to being seen as part of the critical national infrastructure. More information can be found on the BBC news site.

£10 million is going into the development of cyber security solutions designed for improving security of services and digital devices.
The objective of the Digital Security by Design competition is to help tech infrastructure of UK organisations and digital services become more resilient to cyber-attacks.  Nine winning research teams have been revealed and will be sharing the £10 million investment over four years. More on this can be found on the Gov website.

Honda have confirmed they are dealing with cyber-attacks that are affecting its operations around the world. The Japanese care-maker said they were experiencing issues with their computer servers, use of emails and use of its internal system.
They have said that its internal servers were attacked externally and that “the virus had spread” throughout the network. The company has halted work in their UK plant and parts of their operations in North America, Italy, Japan and Turkey were suspended.
At this point it is not known how the system how the hackers got access to Honda’s computer systems. 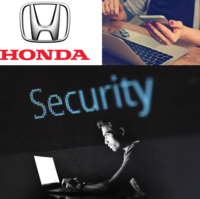